The modern world sometimes feels like it been specifically designed to cause the people living in it as much stress as possible. Early man probably did have it harder, I mean let’s face it if anyone of us had to face down a sabre tooth tiger we’d probably have a heart attack then and there. And if you thought to organize the Christmas Staff party was hard, try getting a group together to hunt down a woolly mammoth!

Despite all the betterments that the modern world has brought us though, it still feels like we’re chained to the clock, running on the treadmill of our packed routine, and if one thing goes wrong it can throw our finely tuned schedule into complete disarray. What do we get from that? Stress. Maybe not the more immediate kind that our ancestor’s experience during their harsh life trials. Instead, the modern human has Chronic Stress, and that kind of stress has its costs.

Stress is defined as the body’s reaction to a potentially harmful situation, either real or perceived. When this occurs the body goes into fight or flight mode. Chemical reactions increase heart rates, quicken breathing, tighten muscles and raise our bodies’ blood pressure. With modern chronic stress, this constant physiological state has some damaging side effects. One of the consequences of this sustained stress can be, you guessed it, hair loss.

High-Stress Levels is Associated With Three Types of Hair Loss

Have you ever felt so stressed by things going wrong that you wanted to tear your hair out? Well, as it happens, there is a medical name used to describe this specific medical disorder.

Those who suffer from this disorder have an irresistible urge to pull out their hair from their scalp, as well as other area’s of their body as a flawed method for dealing with negative emotions.

Also known as ‘spot baldness’. This is an autoimmune disease that causes the body’s immune system to fail to recognize it’s own cells. When this occurs the immune system treats the follicles like foreign bodies and actually attacks the hair follicles! 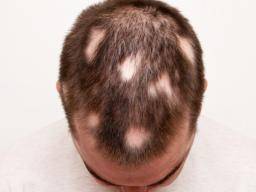 It is called spot baldness because often this hair loss occurs in small, coin-sized patches. This can become widespread and can in rare cases lead to complete hair loss, including eyebrows, yeesh!

Worse yet, there is no cure though most patients see the condition resolve itself within a year. Sometimes, however, the hair loss is permanent.

There are a variety of factors that are thought to cause this to occur, but severe stress is one of the possible factors.

Many of us have had moments where we catch a glance at our hairline at an unusual angle or in a non-habitual mirror and we wonder ‘am I going bald?’! Well, if you don’t find a way to deal with severe emotional stress the answer could be yes.

In extreme, rare circumstances, stress can cause hair roots to be pushed prematurely into the ‘resting phase’. 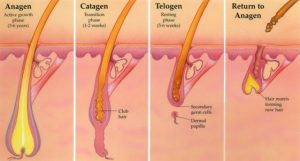 The resting phase is also called the Telogen Phase. This is one of the later stages of a hair strand’s natural life cycle when the strand no longer has access to the blood supply and fresh cells needed to produce new hair.  It is then ready to exit the scalp.

With Telogen Effluvium, there is very often what is described as a shock to the system. Later, about 2 to 3 months, as many as 70% of scalp hairs are then shed in large numbers.

This shock to the system can be resultant from childbirth, high fever or severe illness that can cause great physical duress as well as a large amount of additional stress.

Thankfully, this is not a permanent hair loss and the hair will eventually grow back.

There are a lot of reasons why you could be losing your hair. Whatever the answer, the specialists at the Toronto Hair Transplant Centre understand that even if stress isn’t the direct cause, it certainly can be a major effect when dealing with the potentially psychologically damaging trauma of hair loss. They’re available to answer all your questions and start to find a way to deal with your hair loss and the stress that it causes.

Whatever the answer, we will have a solution.

So, when it comes to hair loss, you don’t have to stress about it anymore.

Hair Transplant Toronto: A Comprehensive Guide If you are considering a hair transplant, Toronto is a great place to do it. There are many qualified

Have you ever wondered about eyebrow transplant surgery? Looking to restore your overplucked or thin brows? Well you’re not alone. Eyebrow FUE surgery is pretty