It’s common for people to walk down the street and see a man with bald of thinning hair and think nothing of it. There’s a commonness to it. People expect men to go bald. It’s more jarring, however, when a woman who is balding walks by.

It’s actually perfectly normal for women to shed some hair each day. When bald patches or thinning occurs, however, it can be very stressful. For many women being bald is their worst nightmare. Society expects some men to suffer from baldness, but for the few women that go bald, it can make them feel like a pariah as often really hits their self-esteem.

For some women, the cause may be stress, in which case the hair can get thicker again once the stress-inducing factors are removed. It could be a reaction to certain drugs. This is not limited to chemotherapy drugs and includes many common pharmaceutical drugs that have certain potential dude effects. A woman’s thinning hair might also be due to female pattern baldness.

What Is Female Pattern Baldness? 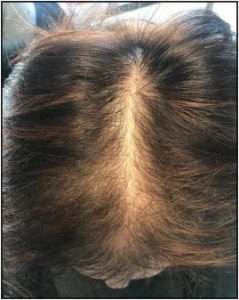 The difference between male hair loss and female loss is that when men experience hair loss they tend to develop a receding hairline and bald spots. With women, the baldness is usually experienced as a general hair thinning, noticeably affecting the total volume of hair. It is very unusual for the hairline to recede as it does with men.

The first signs of female pattern baldness is often a widening part. Many women also start to notice that the hair just does not feel as thick as usual. Hair grows in what is known as follicular units, with two to five strands growing out of one unit. When it starts to become more common for units to have just two hairs instead of three to five, the hair starts to feel and look thinner. 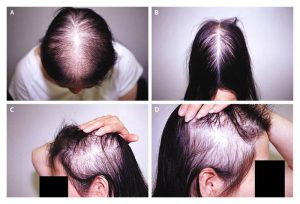 Female pattern hair loss usually begins at around the age of 30, though it does occur earlier in rare cases. Thinning hair usually becomes especially noticeable around age 40 and more so after menopause.

Within the follicles affected by female pattern hair loss, biologically active testosterone is converted by an enzyme into a much more potent hormone derivative called ‘Dihydrotestosterone’. This powerful hormone inhibits the metabolism for the forming of genetically pre-disposed hair cells. The follicle thus shrinks, resulting is finer, weaker hairs as it does so.  Eventually, these hair follicles die, resulting in irreversible baldness. 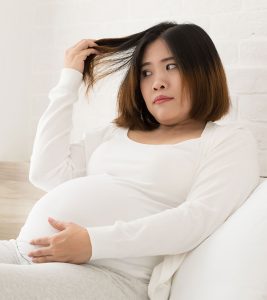 When a woman is pregnant hormonal changes are occurring. This causes more hair follicles to enter the growth phase than normal. Once the child is born, about two to three months later, the normal hair cycle returns and with it, many hairs re-enter the resting phase.  This can be alarming because the result is that excessive shedding occurs. This is usually a temporary condition, and as hormone levels in the body return to pre-pregnancy levels after about six months, the excessive shedding normally ends.

During menopause, there is a changing in the levels of hormones. Estrogen and progesterone levels fall, meaning that the effects of the androgens are increased. This is significant because alopecia is related to increased androgen activity.  In menopause, when the levels of female hormones fall, the effects of androgens can increase, causing certain hair follicles to fail. Depending on your genetic risk, these follicles produce progressively weaker hair and then eventually none at all. Other factors include genetic predisposition, unusual levels of stress, other hormonal imbalances, nutritional or iron deficiencies.

PCOS stands for Polycystic Ovary Syndrome. If you are a woman with this disorder your hormones are not necessarily working as efficiently as possible. Women with PCOS have bodies that make more male hormones, otherwise known as androgen than it should. Whilst this can cause extra hair to sprout on your face and body, it has the opposite effect on your scalp with the hair on your head thinning out. PCOS can also lead to ovulation problems, acne, and weight gain. Sometimes thinning hair is the only obvious sign and if you are struggling to explain your hair loss, this could be the answer.

If you would like to know more about Female Pattern Hair Loss, please contact the Toronto Hair Transplant Centre. Our specialists can advise you on what exactly is the cause and what can be done about it. Sometimes the best answer really is transplantation. It’s never been a more affordable time to opt for the permanent solution in ensuring you have the hair that you want.