When men lose their hair, its commonly accepted as general ageing. Of course, hair loss is damaging to males self-esteem. When women begin to lose their hair, the psychological damage can be much more devastating. When a woman begins to lose her hair it can also directly affect her physical health, says the American Hair Loss Association (AHLA).

There are many studies that have examined the impact of hair loss on women. Many of the participants reported feelings of depression, isolation, and general self-doubt. It is quite evident that when it comes to female hair loss it’s a big deal to the people suffering from it.

According to UCLA, fibroids are the most frequently seen tumours of the female reproductive system. Fibroids, also known as uterine myomas, leiomyomas, or fibromas, are firm, compact tumours that are made of smooth muscle cells and fibrous connective tissue that develop in the uterus. It is estimated that between 20 to 50 percent of women of reproductive age have fibroids, although not all are diagnosed. Some estimates state that up to 30 to 77 percent of women will develop fibroids sometime during their childbearing years, although only about one-third of these fibroids are large enough to be detected by a health care provider during a physical examination. While it is not clearly known what causes fibroids, it is believed that each tumour develops from an aberrant muscle cell in the uterus, which multiplies rapidly because of the influence of estrogen.

But you need not worry – in more than 99% of fibroid cases, the tumours are benign (non-cancerous). These tumours are not associated with cancer and do not increase a woman’s risk for uterine cancer. They may range in size, from the size of a pea to the size of a softball or small grapefruit.

A New Study on Fibroids and Hair Loss 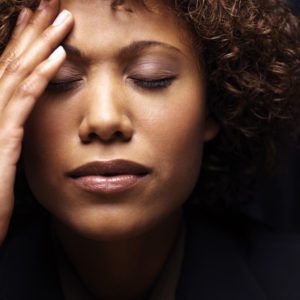 A new study has indicated that black women with similar hair types and hair loss may also be at a higher risk of developing fibroids. Over four years of data of over 487,000 adult Black women were studied, and this also included information regarding a hair loss condition called the central centrifugal cicatricial alopecia (CCCA).

Black women are the ones usually affected by CCCA.

It is discovered in the research that almost 14% of women affected by CCCA also had fibroids while only 3 percent of women without CCCA had fibroids. This shows that women with CCCA have five times higher chances to develop fibroids.

“The cause of the link between the two conditions remains unclear,” says Dr. Crystal Aguh, the author of the research and an assistant professor of dermatology at the Johns Hopkins University School of Medicine in Baltimore. 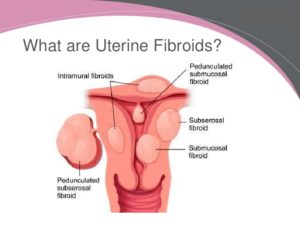 Even though the research doesn’t prove that one condition causes the other, there still seems to be some sort of connection between the two. Nevertheless, the findings still suggest that women with CCCA be checked up for fibroids or any excess fibrous growth.

More on the Study

The study also took into consideration that black people in general, are more likely to develop some conditions that involve scarring and that scarring is one of the results linked to the beginning of CCCA.

Consequently, the findings of the research show that CCCA-linked scarring is resemblant to the type of fibrous-tissue scarring associated with fibroids, which could be the reason why there is a higher risk to develop fibroids with the hair-loss condition.